Guillermo del Toro is working on an American version of giant robots versus kaiju movie called Pacific Rim. You may have heard Ricky and me talk a little about it on the podcast. If you are unfamiliar with what kaiju is then think of Godzilla or any other Japanese giant monster and that will be your answer. We have only recieved little snippits and the official trailer is about two weeks away from releasing, but today a few viral videos and images released on the internet and we are all grateful for it.

Hit the jump to see one more video and two images.

The Gipsy Danger is one of the first image of the mechs that will fight the kaiju.

A secret memo regarding the first Trespasser Event.

And finally they released a video showing an attack on San Francisco by a kaiju.

Other blueprints are also popping up for various countries’ Jaegers. Take a look at Australia’s Striker Eureka, Japan’s Coyote Tango, and Russia’s Cherno Alpha. (We’ll update with better images as they become available.) 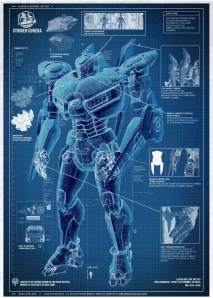