Previously Marc Webb tweeted out an image of the eye for Spider-Man’s mask, hinting at it being updated for Amazing Spider-Man 2. There was rumor and speculation that it may hint at a darker Spider-Man, maybe an introduction of the black costume or even Venom. This week, the image of the updated costume hit the internet.

Hit the jump to see the new threads. 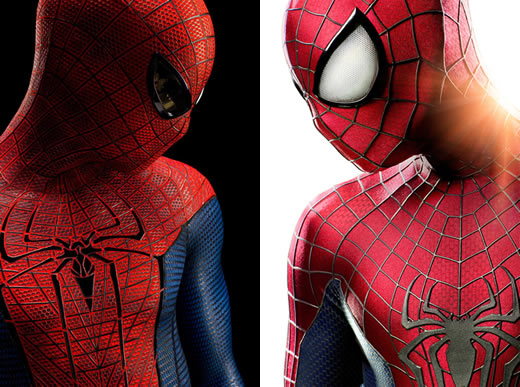 As you can see; the eyes, the web spacing, and the layout of the red and blue are a little more in line with the traditional costume.

I enjoyed the first Amazing Spider-Man immensely and I still have a fond place for the original Sam Raimi trilogy, but I never felt that any of the costumes was Spider-Man leaping off the page. I have never felt that way, until now. This costume, even though it still has carry-overs from previous movie iterations (the spider symbols on front and back, the cell texture of the costume), looks as true as I have ever seen a Spider-Man costume. Looking at it, the image almost reminds you of your favorite artist’s rendition of the Webhead.