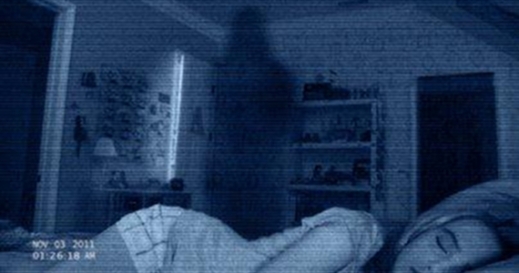 Last night Natalia and me went to watch the fourth installment of the Paranormal Activity series. I have been a fan of these movies since I caught the first two back to back on DVD. I truly enjoy the back story as well as the horror that is not graphic like a few other gore-porn movies have done.

For this review keep in mind that I will probably spoil the first three movies, but I will avoid spoilers for this movie. Again, NO SPOILERS for Paranormal Activity 4.

How well did this fourth movie do? Hit the jump to find out what I think.

Just to catch you up, chronology this movie takes place a couple of years after the final events of Paranormal Activity 2. What we know is that Katie has survived the first movie but is possessed by a demon, in the second movie we find out that the demon actually was stalking Kristi but her movie moved the curse to Katie causing Katie to kill the family and kidnap Hunter (Kristi’s son), and in the third movie we find out that all of this happening because their family is part of a witch coven. Did you follow all of that? Good.

Now where does that leave us for the fourth movie? It is a brand new family now with Katie and a boy living across the street. The movie focuses on a young teenage girl named Alex. She has her own camera that she follows everyone through the household with, but most of the found footage comes through recordings coming from the webcam on a few different laptops. Yes, a little bit of suspension of reality here. Anyway, the movie starts when Katie has a medical emergency and has to leave her “son” with Alex’s family. That is when the scares begin.

While I do not want to compare it too much to the other films, when there are four films then it becomes a tad difficult. Paranormal Activity 4 ranks at the bottom on the scare factor. Do not misunderstand me, there are moments that will scare you. But the tension is often broken by humor instead of outright scares. The filmmakers must know what they can already get away with in this style of film. There are a few fancy tricks using the Xbox 360 Kinect, but that is about it for new scares. The best scares of this series come from the unexpected moments and those moments are few in Paranormal Activity 4. My favorite scare of the series comes from the third movie when the mother walks into a room with a falling dinner table. unfortunately I never feel that scared in this movie.

The story itself is another matter. While I will not spoil anything, let me just say that story for this one is nonsensical and really does not connect with the other films all to well. Paranormal Activity 4 feels like a standalone movie. Yes, Katie and Hunter are in this film but I could not follow the logic of the why of it all. Alex and her family are inconsequential plus we do not care for them. In the other films, we would at least hope one of the characters would get what they deserved. I would have hoped that they would advance an interesting story, but they fail to do so. I hope they actually move forward in the inevitable followup films. Until they do so, this movie will just be a mindless rehash of their past films.

I can not honestly recommend this movie to anyone. This one may just be for only the hardcore fans, even then it is a stretch. The Paranormal Activity series has done a lot for the found footage genre of horror films, but the latest movie fails to live up to that legacy.

2 responses to “Review of Paranormal Activity 4”