Who Is The Next Robin?

Alright, enough time should have passed that this is not a spoiler but two weeks ago in Batman Incorporated #8 a Robin died. Now comes the speculation on who will fill the green shoes of Batman’s sidekick and we’ve been given an idea of who it might be.

Swing past the jump to see who might be the next Robin.

Damian Wayne, a.k.a. the latest Robin, died recently while battling a super-sized twin cloned by Talia al Ghul. She had set up a series of events under the guise of Leviathan trapped Batman right until the moment where Robin would be dead. The death of Damian came to a surprise (unless you were spoiled from various news sources) when people picked up the issue, especially since the character has only been around for six years. To be honest, I grew up with Tim Drake as my Robin but Damian was quickly becoming my favorite Robin.

Anyway beyond that; Batman has never been without a Robin for too long of an extended period, even with the death of Jason Todd and the “death” of Stephanie Brown. I would give it a few months to a year especially since we may have been given an idea of who will be the next Robin. Grant Morrison has given a few clues and even Scott Snyder has built up a character.

Let’s see who may be the next “Boy” Wonder.

By the way, let’s get it out of the way that DC Comics seems intent on not bringing back Stephanie Brown so I do not think she is coming back (in any of her alter-egos). 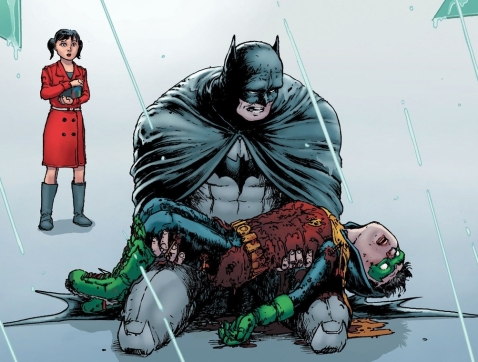 Our first possible Robin is Ellie. Ellie is a creation of Grant Morrison that has appeared sporadically throughout his Batman stories. She first appeared in Batman #664, before the New 52, as a young prostitute that Batman helps. In only a handful of appearances, her situation continues to improve and Batman always takes notice of her. Normally, that may be seen as just a supporting character thrown in for some flavor but her feature in Batman Incorporated #8 forces us to take notice. In the issue; Ellie is referred to as “Ellie-Bird” by a coworker (a common suffix for past Robins), she features heavily throughout the issue even saving the day, and in the final moments as Batman holds Damian’s body she is the only other character in the background (not to mention she is wearing the bright red).

Our next possibility is Squire, a Robin in her own right. Squire, a.k.a. Beryl Hutchinson, was the sidekick of the Knight. Squire is also another creation of Morrison, appearing in JLA #26 alongside the Knight who previously was a Squire to another Knight before Morrison promoted him. Squire has featured heavily during Morrison’s stories with the Black Hand and Leviathan. How does that prepare her to be the next Robin? During a savage fight against the Heretic, who would eventually kill Damian, Squire lost her mentor as the Heretic snaps the Knight’s neck. Coupled along with Batman’s loss of a partner, Squire would fit perfectly in the Robin-shaped hole.

Unlike our other options, Harper Row was created by Scott Snyder and is the only character post-New 52. Harper first appeared in the New 52’s Batman #1. Harper Row seems like the obvious choice with her featuring heavily in the past year and a half during Snyder’s run on Batman. She also fits the Jason Todd/Tim Drake mold of characters, meaning that she impresses Batman through her own skills. She is able to hack into Batman’s electrical wiring throughout Gotham, she has saved Batman on multiple occasions, and not to mention her back story already is shaping up to lead to a tragedy that will inspire her (hopefully).

I find it very fascinating and appealing that the next Robin will be a girl. The only female Robin (not from an Elseworlds story) was Stephanie Brown, who before went by the nomenclature Spoiler before becoming Robin then returning to Spoiler and finally becoming the new Batgirl. But that was pre-New 52 and as I mentioned before, DC editorial does not appear to want to return her into continuity. The next possible Robin can be the first female Robin in editorial canon. This is a strong group to choose from but it comes down to when Batman is ready to accept another partner. How long will it be before we see one of these characters in the red and green?

3 responses to “Who Is The Next Robin?”