Breaking Bad is back, and so am I with your Breaking Bad Recap of S5 E9! It has been about a year since the first half so please feel free to utilize our recaps for the previous episodes. Also, for those of you with a Netflix subscription can go back and watch from the beginning. I was so excited for Blood Money because episode eight left us with so many questions.

What were the results of Walt’s full body scan?

What will Jesse do with the money?

Is Skylar ready to forgive and move on now that Walt has retired?

Now that Walt is retired, what does that mean for his meth empire?

I’ll let you know that after the jump I have the answers to most of these questions. This episode covered a lot of ground and unearthed a lot more questions. Hit the jump for a full recap of Season 5 Episode 9: Blood Money.

This episode began in an abandoned house whose empty pool was infested with neighborhood skaters. The camera pans above the pool and you find yourself 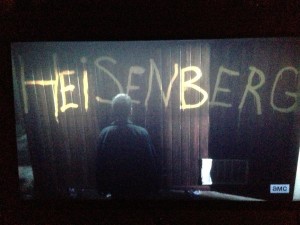 looking over the Whites back yard, but it abandoned. Graffiti lines the exterior of the home and an old car pulls up outside. Flash-forward Walter White steps out with a full head of hair and a beard that most hipsters would be proud of. He walks to his trunk where we see the rifle purchased at the beginning of the season in a flash forward sequence.

He doesn’t seem surprised to see his home with a chain link fenced wrapped around it and he pushes his way inside the home. In the living room we see Heisenberg written in yellow spray paint on his living room wall. He calmly walks through the home and retrieves the Ricin that he had hidden behind the switch plate in his former bedroom.

We get the feeling that Walt and his family are not thought of as that nice family next door when Walt leaves and gives his neighbor Carol a fright. LoL.

Flashback to the day of Skylar and Walt’s barbeque from the last episode.

Hank emerges from the bathroom holding Walt’s copy of Leaves of Grass, which has an inscription from Gale. He has put 2 + 2 together and excuses himself from the rest of the barbeque. (Only took him four and a half seasons!) On the way home he is visibly shaken and a panic attack causes him to crash into someone’s front yard. R.I.P. David the Gnome.

Cut to Walt and Skylar’s carwash.

Walt and Skylar are having a conversation about their legit business and how they should think about expanding and buying a second car wash to help launder Walt’s dirty earnings. Then Lydia drives up and seeks out Walt. Lydia is still running the meth to the Czech connection and is worried because the quality of the product is down to 68% clarity. Nowhere close to Walt’s nearly perfect clarity. She offers to make it worth his while to fix the product, but he insists that he is not coming back. Skylar catches the tension at the end of their conversation and upon learning that Lydia is from Walt’s former life, she decides to go after her. Skylar steps to Lydia and threatens her saying she is never to come back to the car wash ever again. Lydia practically jumps in her car and drives off, but I don’t blame her… Skylar is effn scary.

Jesse has been a mess. Last episode he and Walt had a tense moment and Walt left him in one piece, but with $5 million dollars of blood money. Jesse is one of the most moral characters on this show and the money is weighing heavily on his mind. While his friends smoke and discuss what is possibly the best Star Trek episode NEVER written, (It involved a pie eating contest and Scotty beaming guts. Epic.) Jesse takes the $5M and heads to Saul to try and do right by the innocents left behind in his wake. Jesse asks that the $5 million be divided between Mike’s granddaughter and the parents of the boy killed in the desert.  Saul can’t believe what Jesse is saying and after his concern goes unheaded Saul calls Walt to talk some sense into him.

Walt leaves and Jesse is again left with bags of money that remind him of all the bad things that he is connected to. He drives around town and falls asleep in a parking lot. A homeless man wakes him and is rewarded with a stack of bills. Jesse drives away and with the accuracy of a paper boy he starts throwing stacks of money in a nearby neighborhood. Will this badly planned charity help erase his guilt? I doubt it, but as Walt reminded him, it is his money, and he should do what he wants with it. He earned it. Now if only he knew the way to my neighborhood.

Back at Hank’s place

He has stopped going to work in favor of digging through all the old Heisenberg files. He is able to match Gale’s handwriting and is finally seeing the resemblance between Heisenberg on the old tapes and his brother-in-law, Walter White. This situation is taking a major toll on the DEA agent which can be measured by the stubble on his chin.

Meanwhile we get the answer to one of the major questions from last episode. Walt is in a clinic receiving

chemo therapy. He later explains that his full body scan came back positive and his cancer is so bad that he may only have 6 months to live. How true that is… I don’t know. Walt is not the most honest person, but his condition was severe enough that he left his empire in favor of reconciling with his family. One of the side effects of Chemotherapy is nausea and during a family dinner Walt spends his time worshipping the porcelain God. This gives him a great view of his toilet tank which is light a copy of Leaves of Grass. Walt only takes a short time to figure out that Hank must have been the one to take it and on a hunch he goes outside to check his cars. He is  rewarded with finding a DEA tracker.

He makes the time to visit Hank and sees that even though Hank is not as sick as he has been telling people and he is surrounded by old file boxes. They dance around the issue , but Walt is done playing and asks Hank about the tracker.

Hank ends up punching Walt and angrily explaining that he knows everything. Walt tries to reason with Hank, even going as far as using his cancer as a reason not to bother prosecuting him. Upon learning of Walt’s cancer woes Hank declares, “Good! Rot you son-of-a-bitch.” He lists all of Walt’s atrocities and  says he doesn’t care what this will do to their family because he has no idea who Walt is. To which Walt calmly replies, “Then maybe your best course would be to tread lightly.”

Oohhh! The Man who knocks reemerges!

Will Hank back down? From what i remember earlier in the season Walt got in that same beat up car when he bought the gun at the diner on his birthday. That means all this went down in a matter of months! So I doubt Hank is going to hold on to this secret for long! 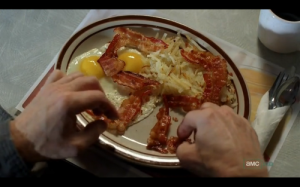 What did you think of the episode? Let us know in the comments.