Reported by Bleeding Cool; DC Comics is set to release a special box set with their Batman “Death of the Family” trade paperback in September.

What’s so special about this mask? Well if the above image doesn’t tell you, then swing past the jump to read what’s up.

“Death of the Family” featured the return of the Joker to DC Comics after a weird as hell stint in the first issue of the New 52’s Batman the Dark Knight. It is an excellent story with a terrifying Joker, both through his action and looks.

DC Comics has decided to provide enough nightmare fuel for months to come with a latex mask of the Joker, which is basically the skinned face strapped on with hair.

I’m reminded of Leatherface from Texas Chainsaw Massacre, except the smile haunts my soul.

You can pre-order your book/mask set for $25.

While the Court of Owls mask is less horrific, it is no less scare especially when you get a room full of people wearing them. 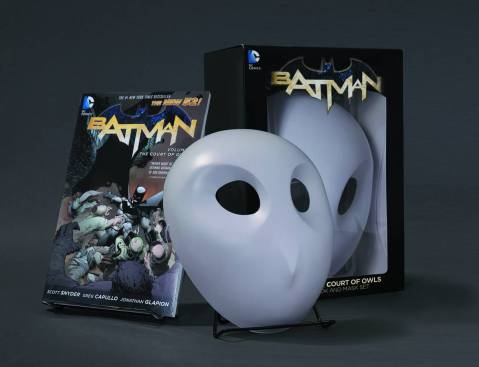