What is your girlfriend reading? 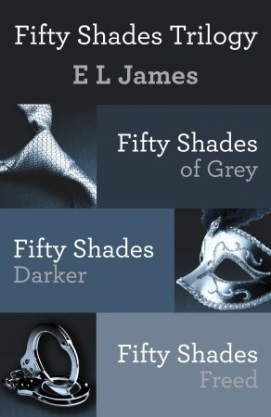 Let’s talk about the fifty shades of Grey….

Once in a while I enjoy picking up a book from the current best sellers list and since I am almost finished with the Kingkiller Chronicle book 1  I have been watching the New York Times best sellers list in preparation for my next read. However, the past few weeks this list has been dominated by the Fifty Shades Trilogy of  E.L. James.

For those of you living under a rock this is a popular series that began as a Twilight Fan Fiction where you switch Vampires for Dominants and Submissives.

The plot traces the relationship between recent college graduate Anastasia Steele and manipulative billionaire Christian Grey. Steele is required by Grey to sign a contract allowing him complete control over her life as well as a non-disclosure agreement, something that he’s required from all of his previous submissives. Upon learning that she is a virgin, Grey agrees to have sex with her in order to prepare her for later encounters, fully intending that the contract would be signed. As she gets to know him, she learns that his sexual tastes involve bondage, domination, and sadism, and that childhood abuse left him a deeply damaged individual. In order to be his partner, she agrees to experiment with BDSM, but she struggles to reconcile who she is (a virgin who has never previously had a boyfriend) with whom Christian wants her to be, his submissive and a to-do-with-as-he-pleases partner in his “Red Room of Pain”

Yes, I read this trilogy, mainly out of a sense of morbid curiosity.

E.L. James is a good writer, but this particular story is basically the same as Twilight with the metaphor changed. When trying to get through a bad case of writers block I think writing fan fiction can be helpful and so I understand why she would write such a blatantly identical storyline, but that doesn’t mean it should have ever been shopped or bought by an actual publishing house.

This series is in no way shape or form a great story. Why did I read all three?

I think that people are naturally curious especially when sex is involved. S & M is not a mainstream thing and I think people who have only had “vanilla” would like a sneak peek into how the others are indulging. This book is like a manual and brings the world of dominants and submissives into the light and explains what each partner is getting out of this unorthodox relationship.

That being said I believe that E.L. James kind of wussed out by having the love story overshadow the exploration of the Dom / Sub story. Basically Christian realizes that this lifestyle stems from his violent childhood and comes to see it as wrong. So the last two books it is about reform in place of how he is fifty shades of f***ed up.

Towards the middle of the second book I think Ana’s internal monologue kept me reading. She refers to her inner goddess while testing her own boundaries which results in hilarious one-liners. As long as you do not take the subject matter too seriously these books are quite funny. I flew through these books mainly because I am a bit shy when it comes to reading the racy parts so I just skipped most of them and was left with an oddly entertaining story.

Chances are if you are one of those who enjoyed the Twilight Saga, but would like a bit more bite you may actually enjoy this series. All the favorite characters are there and making the connections is a bit fun while trying to understand this new world. These books are so popular right now that I am hearing people discuss them in public and making references to Christian Grey as though he were a real person. It is a bit mind blowing that an erotic novel has transcended genre lines and claimed a spot on the top of the best sellers lists. For those who are more visual don’t worry the movie rights have been bought and many of your favorite stars are vying to play parts in this potential blockbuster.

So all in all, I give the series a  two and half out of five star rating.

7 responses to “What is your girlfriend reading?”