When I heard there was a show Eric Kripke developed, Bad Robot and J.J. Abrams produced, and Jon Favreau would direct the pilot; I was immediately just excited because of the creative force behind it. The post-apocalyptic world where no electronics worked also had me hooked.

So when the show premiered last night, I caught it and thought I would share a recap of the show with what I thought. Hopefully I will enjoy this new series throughout the first season at least, because lord knows I need a good new series.

It should go without saying, but just in case here is a warning. Spoilers for the first episode of Revolution after the jump…

The show begins in what appears to be current day as Ben Matheson (played by Tim Guinee) rushes into his home, trying to prepare his family for an apocalyptic event he knows to be coming. He beings uploading something to a silver pendent and trying to call his brother to try to warn him. Before Ben can get the entire call through the power begins to go out. Everything electric begins to go out from cars and phones to entire cities and the falling planes that are heavily depicted in the trailers. Thankfully for Ben, he was able to complete the upload before his laptop was shut off.

The Mathesons’ baby son begins to cry as he no longer has a TV to distract him. How are we ever going to deal without cartoons and Disney movies?

We are given a walk-through as we learn most people have migrated out of cities to survive since most basic services no longer function.

15 years later, the story picks up in what appears to be a small farming village. There are a few country houses built in a circular fashion with crops planted all around. The Matheson children have grown up into adventuring teenagers. Charlie or Charlotte is the head in the clouds, crossbow wielding young woman who also wants to explore the world at large. Then there is Danny the younger brother who is a little more hesitant and prone to asthma attacks as we soon learn when they explore a tipped over RV. He is brought home and Ben’s new love since the passing of Mrs. Matheson in the past 15 years has given him a drink to treat the asthma. Maggie (Anna Lise Phillips) happens to be also the town doctor.

As far as we know the United States is divided among itself with republics. It is a nice word for warlord/militia run territories. Introducing themselves as the main villain of the show is the Monroe Republic and one of its captain in Tom Neville (Giancarlo Esposito, recently known from Breaking Bad and Once Upon A Time).

The Monroe Republic is searching out for Ben and his brother Miles.

Neville threatens Ben with conscripting his children which includes re-education. I am actually looking forward to see how this indoctrination can provide more to the show.

Before Neville can lead away Ben, Danny steps in with a crossbow aimed at the captain. Soon the scene escalates as the town member pulls a gun which is hanging offense in this republic. A huge scuffle occurs as the village fights to protect on of its own, but of course the bad guys are better equipped. Neville pulls out his hand gun and begins blasting away at the troubling town members.

For all this trouble, the militia do not have their man as Ben is shot in the mayhem. So for consolation Neville takes Danny instead which begins our hero quest for the story.

Charlie finds her dad bleeding to death and he tells her to find Miles in Chicago.

As she leaves, Maggie decides to join her along with Ben’s friend Aaron (Zak Orth) who appears to be the atypical overweight geek that we later find out was once worth 80 million while he worked for Google.

Along their journey to Chicago; the adventuring party takes a break and Charlie encounters Nate (J. D. Pardo) who is looking over his bow. This scene is quick but it introduces what will probably be a very interesting character.

The party arrives at an airfield. Aaron recommends they should stay in the airplanes since they would store medical supplies in the front of the plane (he would know this since he owned one).

We cut to Danny quickly where he has worked a screw to the pipe that he’s been handcuffed to off and is able to get himself free. He uses the pipe on one of his guards. The sound reminded Natalia of that nice feeling of a solid hit in little league with an aluminum bat.

While the party is asleep they are ambushed by bandits. Maggie convinces them to try some of the whiskey she has in her bag. One of the bandits grabs Charlie to do naughty stuff with her. Then we find out that Maggie has poisoned the whiskey and the two remaining bandits die, coughing up blood. Reminded me very much of The Road where it was trust no one and have traps for those that try to interact with you. I can tell that Maggie can be very cold and calculating.

Unfortunately, the bandit trying to rape Charlie had not taken of the poison. Fortunately, Nate had followed them and placed an arrow inside the bandit (and that was not a euphemism).

We then go back to Danny, who reaches a farm house. When you think all is fine and dandy, you see in the air pollen that cause Danny to have another severe asthma attack. Luckily he is saved by the owner of the house, who also happens to have an inhaler that once belonged to a son that we do not see in this episode or maybe ever.

After their ordeal at the airfield, the party arrives in Chicago. Charlie takes in the sight of Wrigley Field, a whole new world opens for her.

They quickly find Miles working behind a bar in what used to be the fancy Grand Hotel. But he is very much the reluctant hero and would rather stay hidden in his self-exile. Although we see that his still very skilled as a fighter as he disarms Nate when Nate attempts to confront him on Charlie’s behalf.

After a quick one-on-one talk between Miles and Charlie, they re-enter the bar. Seeing Charlie dismayed, Nate again confronts Miles but it does not end how he would have intended. Miles reveals that Nate has been a Monroe spy this entire time, following the party in hopes of finding Miles.

We go back to the farmhouse that Danny is resting in. Neville has tracked him down. Reluctantly, the lady of the farm allows the militia squad to enter the house and recapture Danny.

We go back to the Grand Hotel where Miles has said that he would stay and face against the squad that Nate was no doubt gathering to return to capture him. Miles is an adapt fighter, very skilled with the sword. He has set up the central staircase area as a location to best defend himself. And defend himself, he does. He almost single-handily fends off the entire squad, but Charlie interferes and kills one with her crossbow and thus garnering the attention of two of the squad. One of which is dispatched by the team of Aaron and Maggie, the other one confronts Charlie on the outside stairs of the hotel. Funny thing how earlier when first arriving at the hotel, the area is filled with other people but now there is not a single soul around as far as I can see. Either way, Charlie is saved yet again by Nate. I smell a bad boy, love interest here!

A flashback shows what Miles was doing at the time of the initial blackout. He was with his buddy, Bass. Both of them are coming back to base after a night of drinking. The arrive at a marine base and here we find out that Bass is actually Sebastian Monroe who will eventually become General Monroe of the Monroe Republic. A very classic facing off of enemies that once were friends.

After that we come back to present time where we find out that the lady that had housed Danny also had a silver medallion, much like Ben’s. The medallion turned on the electricity to a computer to which she was able to have a text conversation with an unknown collaborator.

That is the cliff hanger…

What did you think of the show?

I’m actually finding it to be a fun show so far. There is a Tolkien feel to the make-up of the group and the heroes. A lot of old fashioned tropes are being utilized also. That may be a turn off to some of you, but if done right it can lead to a fun story which I think I will be invested in for the season. 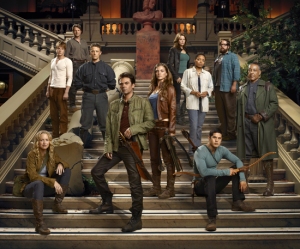