Reach Out And Touch Faith

Religion and Science find a rebellious foothold in this 6 issue series about the second coming of Jesus Christ. Sean Murphy is the writer and artist of this brilliant story of a media saturated society and how they shaped Jesus’ second coming. Jesus is brought back as a clone named Chris Fairling. This child is born to a virgin on international television and raised in front of thousands of cameras; Truman Show style. The series follows Chris’ struggles to be who his genes destine him to be. Along for the ride is a tough as titanium head of security, former I.R.A. member, Thomas “The Cemetery” McKael. On the surface the story begs the question of who Jesus would be in our current world. How would the rebellious spirit manifest itself in this day and age? Punk Rock, duh! 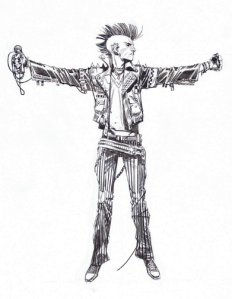 This series may revolve around the titular character of Jesus, but the theme is living up to expectations. The story takes place in an exaggerated reflection of our own media-guzzling society. A society that thinks having a child grow up on television, with the added pressure of being the second coming, is a good idea. It tackles that dilemma we all face of which road to take. Murphy surrounds the clone with characters that each have a rebellious streak and in their own way are making the best of whatever situation they are in.

Sean Murphy has successfully taken a coming of age story and created an extreme that is brought to life in his amazing art work.I know Murphy from his work on Grant Morrison’s Joe the Barbarian. I try to pick up comics that have already concluded to keep from waiting for a 20 pg book that may never come. Sigh… I have no patience. I had heard whispers of Punk Rock Jesus from other light-weight comic readers and I am so glad I picked it up.

Punk Rock Jesus is a series drawn in black & white. I personally felt that the absence of color helped to engage my imagination and mute the violence contained on the pages so it did not detract from the story.  I am not sure if this was to showcase the expert inking skills, or to save some money, but it was a great choice. The lines are thick and create a texture that match the depth of the story. Murphy has a way of drawing that you get the grittiness of the character while still coming across as clean and detailed. I am not so versed that I can compare and contrast with other popular artists, but I know what I like and this guy is it.

I wasn’t really sure what kind of story to expect when I picked this up. Overall, I thought the ideas explored in this series were balanced and expressed the consequences of extremism in a way that readers from each camp could receive the message clearly.